by The Badger Theater Answering Machine 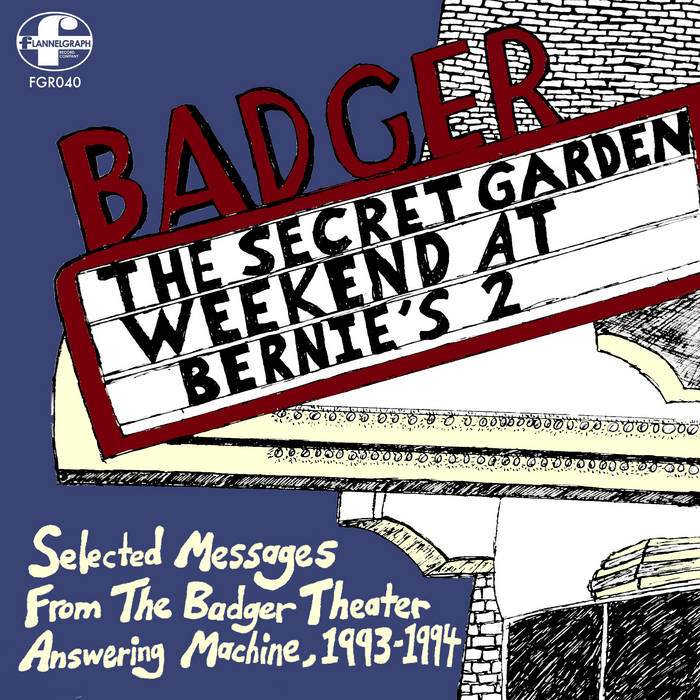 "In 1993, the Badger Theatre, a single-screen movie house in the small town of Reedsburg, Wisconsin, was facing competition. A newfangled multiplex had opened just down the main street, but the Badger's eccentric longtime operator, Elmer Krueger, wasn't giving up without a fight.

When you called the Badger's answering machine, you wouldn't just get the movie's title and showtimes. You would get Elmer's very own plot summary and his personal exhortations of praise for the week's feature presentation. His messages became particularly impassioned for old-fashioned family films such as Disney's "Snow White and the Seven Dwarfs" or the new release, "The Secret Garden", which he deemed superior to "portrayals of contemporary violence, sexual situations and obscene language". His cheerleading for "The Secret Garden" was extravagant -- and long-winded. If you simply wanted to know when the movie started, you had to wait until nearly the end of his two-minute rhapsody.

But, the marketplace being the marketplace, Elmer couldn't restrict his bookings to G-rated films, which would cede all of Reedsburg's non-family business to the interloping multiplex. Elmer's sales pitch would be notably less enthusiastic when his movie for the week was, say, "Jason Goes To Hell" or "Weekend At Bernie's II", but the message was always delivered in Elmer's unique style.

After I'd become aware of its existence, I made weekly long-distance calls to the Badger movieline for almost a year. Eventually, the number stopped answering and I heard that the theatre had gone out of business. But as long as these messages exist, you can still imagine that there's still a Badger Theatre out there somewhere, where you can munch on the best popcorn in the world, topped by REAL Reedsburg butter."

REEDSBURG - Elmer V. Krueger, age 92, of Reedsburg, died on Saturday, Dec. 17, 2005, in his home. He was born in the year of tranquility, July 17, 1913, in Princeton, Wis., the son of Emil and Pauline (Radtke) Krueger. Elmer was a 1933 graduate of Princeton High School. He then farmed the family farm for 25 years until becoming involved in the theater business. He will be remembered for showing free outdoor movies for many years. Elmer operated movie theaters in Princeton, Muscoda, Viroqua, Edgerton, Plainfield and Reedsburg. He operated the Badger Theatre in Reedsburg from November 1960 until his retirement in 2000. Elmer was always willing to reach out and help others whenever possible. He will also be remembered as a Christian mentor and friend to many. He was also the author of his trilogy: "Timeless Treasures," "Endless Echoes," and "Eternal Embers." He was a faithful member of Faith Lutheran Church in Reedsburg.